BLOG > The Greatest and Hardest Day

The Greatest and Hardest Day 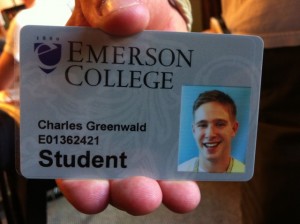 I had to wait a day or two to write this post to make sure I could handle it.

On Monday we dropped our oldest son, Charlie, at Emerson College for his freshman year. It was a memorable day, in every sense of the word.

I’m going to sound like a typical parent here, but Charlie is a remarkable person. Incredibly kind and extremely funny, he lights up any room he’s in. He’s a great son and a great friend.

So I knew it would be hard letting him go. But I didn’t quite realize how hard.

It first hit me about a week before he left. We’d had a great summer, he was in a fantastic mood, but one night I suddenly realized that in a week’s time, he’d be gone.

That was the first night I cried.

We had a great week after that, though. A lot of fun events, including my book launch events and a commercial shoot with Paul Rudd, kept us occupied and distracted.

But then came Sunday night.

I was watching Charlie as the show ended. He was completely wrapped up in the episode, but the second it ended, his face changed. It was as if he knew summer was officially over, and tomorrow he would be leaving. For the first time, I saw a hint of doubt and nervousness creep into his expression.

It was getting real.

We did a little packing and a lot of hugging that night, and I’m not gonna lie (one of Charlie’s favorite expressions), sleep was a little tough to come by.

The next morning, Monday, we sprung into action. Charlie and I took Moose and Coco for one last walk – his relationship with the dogs is a thing of beauty – and Cathy helped him with his last-minute packing (or should I say stuffing, since his suitcases were garbage bags. A great space-saving technique, btw.)

We hit the road about 11, and had a great drive up. Good conversation, a little nosh, easy traffic. We talked about a lot of things that made us feel good, including that fact that when you add it all up, he’s basically only at college 6 ½ months of the year, and home the other 5 ½ months. At these prices! Never have I been so grateful for being ripped off so royally.

We pulled into Boston around 2 and turned the corner onto Boylston Street, where we were immediately greeted by the uniquely Emersonian brand of happiness. Adorable students gave us our parking instructions while dancing in the streets; incredibly nice people all over the place got us checked in and situated while music blasted through the halls; we found Charlie’s room, which has a view of the Boston Common that rivals anything on Central Park West.

The hole in my heart was being nicely obscured by all the good vibes around us. But it was still there.

Cathy was a rock; Charlie seemed nervous but excited; and we were running out of excuses to stay by his side.

Finally, with the bed made, the clothes put away and the laundry lesson over, we all took the elevator to the lobby one last time. We contemplated going over to the campus store to take a look around, but Cathy said, “You know what? It’s time to go.” And she was absolutely right.

No long goodbyes, though. That was agreed upon well ahead of time. Cathy and I each gave Charlie a quick hug, kissed him, and sent him on his way. No looking back. Only looking ahead.

The ride home was not easy. Cathy and I cried. But we talked a lot, too, and managed to remind ourselves how blessed we are to have a son that we are going to miss so much.

Last night, Jack, the family computer whiz, hooked up our first video chat with Charlie. It was great to see him. He was funny and goofy. He seemed genuinely happy – although knowing him, even if he wasn’t, he’d pretend to be for our benefit. But I believed it. And since my happiness is in direct correlation with my children’s happiness, I was able to sleep a little better last night.

Time is a funny thing. Relentless, but forgiving. A stealer, and a healer. It’s also a paradox: I don’t want it to go fast, but yet I can’t wait to see my son again. In the meantime, we’ve got to sit our son Joe down this weekend and get down to business.

He’ll be applying to college this fall.