My third CJJ adventure, CHARLIE JOE JACKSON’S GUIDE TO SUMMER VACATION, takes place at a summer camp called Camp Rithubukkee. It’s a gorgeous place, with a crystal-blue lake and rolling green hills and tennis courts and cabins in the woods – although because it’s an academic summer camp, Charlie Joe believes that all the beauty is wasted, in support of a bad cause. At least at first. But slowly, over the course of approximately 216 pages, Charlie Joe realizes that the camp has a lot to offer, even to a slacker like him.

That was the first year I attended New England Music Camp, outside of Waterville, Maine. I was a ten-year-old pint-sized wise-ass who definitely thought I was being deposited among a bunch of orchestra nerds. Well, as it turned out, I spend five amazing summers at that nerd-filled camp, growing up, having unforgettable experiences (most of which I forget), and making friends for life. But when I walked out the gates of the camp in August 1976, that was it. I never went back.

Last weekend, for the first time in 37 years, I went back to camp. New England Music Camp. NEMC!

Driving up, my saintly wife Cathy said that she hadn’t seen me so excited since Haagen Daaz opened a store in Westport. (Which has since closed. Damn you, Westport retail real estate prices!)

Turning into the grounds was a surreal experience. When you see something that you last saw 37 years ago, it’s weird. No two ways about it. But it’s also re-assuring. Because everything was there. Everything was exactly as I remembered it. The place was unchanged.

Until I looked closer. Which is when I noticed that the place was completely re-done, modernized and different.

Ultimately, I decided it was both unchanged and completely different. The best of both worlds.

I spent the entire weekend physically reminiscing. I visited my old cabins. I went to a recital. I saw some old friends. I canoed on the lake. There was a blackout (their first in ten years) after an intense Maine thunderstorm. I went to the mid-season banquet.

On Sunday, I went to a concert at the camp’s famed Bowl-In-The-Pines, an enormous outdoor structure that’s the largest of its kind in the U.S. The musicianship was amazing. (One thing that kept running through my head was, there’s no way I was that good when I was that age.) Before the concert, they had a craft fair, where I signed some books for people who were intrigued that I’d written a story about a camp a lot like NEMC.

“Did you love the camp?” one woman asked me.

“Then how come you haven’t been back in 37 years?”

That’s a good question. Life, I guess. Life is the only answer.

But I’ll tell you one thing. It won’t be 37 more years before I go back.

The canoes are a little cramped for an 88-year-old.

NEW ENGLAND MUSIC CAMP SONG:
By the shores of Messalonskee
Queen of Belgrade’s chain
Reigns New England’s Camp of Music
Bringing fame to Maine
Stand we here, hearts o’erflowing
Full of hope for you
May we rise each day to greet you
Loyal Strong and True

CAMP RITHUBUKKEE SONG:
We gather together on the lake’s mighty shores
To make brand-new friendships, and open new doors
The summer is here now and yes, so are we
Let camp fill our hearts for all eternity. 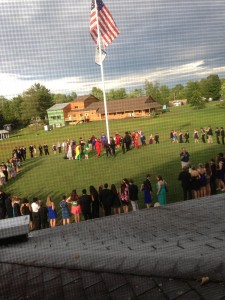 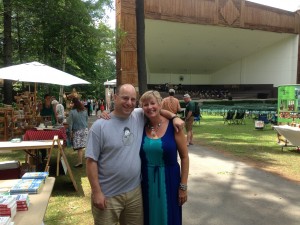 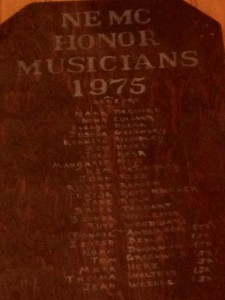