BLOG > DON’T FORGET TO LOOK UP

DON’T FORGET TO LOOK UP

One reason I wrote my newest book, KATIE FRIEDMAN GIVES UP TEXTING! (AND LIVES TO TELL ABOUT IT) — which can be found here and here, or better yet, at your local bookstore —  is because I really wanted to address the issue of kids being on their phones too much. The only problem was, it was hard for me to find the time to write it, because I was on my phone too much.

And therein lies the dilemma. How do I encourage kids not to do something when I’m doing it myself?

So why does it drive me crazy to see my kids – and all kids – behave the same way?

Maybe because I feel like it’s not too late for them. Maybe it’s because I think if they’re this bad now, imagine what they’ll be like when they’re my age! (Not that they can count that high.)

But mostly I think it’s because they’re so young, and I don’t want them to miss out on life. I can see young people narrowing their interests to a tiny screen, and spending most of their waking hours sending each other snapchats, and instagrams, and playing with the newest app is that is known only to people under 18, and I worry.

I worry that kids are looking down, instead of looking up.

I worry that kids play faster and looser with feelings when they’re typing than when they’re speaking — and as a result, egos can end up becoming inflated and bruised, two things that are equally dangerous.

And I worry that kids are gazing at their own reflections, instead of seeing the world.

Katie’s best friend, the semi-infamous Charlie Joe Jackson, argues with Katie about how wonderful cellphones are. Charlie Joe makes the point that they actually help kids communicate. And he might be right. I’m not sure. But isn’t there is such a thing as communicating too much? Is it possible we should be communicating less and thinking more? Ugh… It’s complicated.

Then there is the issue of turning everything into a show.

In the book, Katie has a friend who’s a rock musician, named Plain Jane. She makes a point of telling her audiences to stop filming her concerts with their phones, and actually enjoy the music with their eyes and ears. “Don’t film it!” she urges. “Live it!”

I think she’s right. Because we all know that people take video of concerts and events and ballgames for one main reason. So they can post it on their pages and feeds and blogs and say, Hey, look! I was here! I’m awesome! Don’t you wish you were me?

I don’t love that.

I don’t love that Facebook has become a place where people are constantly putting up pictures of themselves, and their new haircuts, and their fabulous vacations.

Our society is getting more and more narcissistic. And it’s because of social media. And what concerns me is that kids who adapt these habits will just fall deeper into the trap of self-absorption.

BUT… You can brag about your kids on Facebook. That’s totally allowed. It’s human nature. I do it constantly.

So where do we go from here? Can we be saved?

I wish I knew. Addictions are tough to break. And we are a technology-addicted society right now. But if we all take a look at ourselves, and our kids, and make a real effort to balance our lives, and our habits, and remember to look up every once in a while, maybe we can make some baby steps of progress. It’s a start, right?

So that’s why I wrote this book. I hope you like it, and I hope it makes you laugh a lot, and think a little.

Now if you’ll excuse me, I’ve got a ton of emails to return. 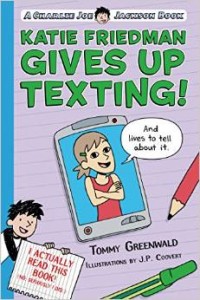