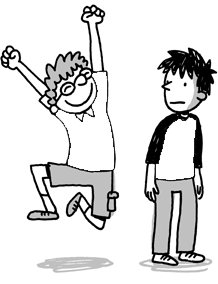 Holy smokes, it’s been a long time since I updated this page… Time to throw some more bragging your way!

Kirkus can be found here.

And the two, lonely Amazon reviews (hint, hint) can be found here.

The early reviews for CJJ2 are starting to come in! And I’m happy to report, they’re very good. (If they weren’t good, would I be mentioning it?

BOOKPAGE has been very nice to both Charlie Joes. Their review of the new book can be found here.

The KIRKUS review is here. Initially it annoyed me but my editor says it’s very good, especially for them.

And couple of early blogger reviews can be found here and here.

If YOU want to review the book, you can! Just go to amazon.com and tell them how much you loved it. Hey, would it kill you to exaggerate a little?

I’ve gotten some swell ones lately. The estimable Betsy Bird of The New York Public library weighs in here.

And other bloggers, who happen to be geniuses, weigh in here, here and here.

Check it out, from Booklist, which is apparently a very influential book in the publishing world. A starred review, written by Hazel Rochman, who is now officially the smartest, most perceptive person on the planet.

*Starred Review*
Charlie Joe Jackson’s Guide to Not Reading
By Tommy Greenwald. Illus. by J. P. Coovert.
July 2011. 224p. Roaring Brook, $14.99 (9781596436916).
First published May 1, 2011 (Booklist).With his “deep-seated love of not reading,” this title’s young narrator, Charlie Joe, speaks straight to other book-averse middle-schoolers. But avid readers will equally enjoy Charlie Joe’s story, with its wild parodies and plot and character surprises that continue to the very end. The elaborate plot revolves around Charlie Joe’s complicated tactics to avoid reading. He sets up bookworm Jake with cheerleader Hannah, for example, so that grateful Jake will read Charlie Joe’s books for a class project about school cliques, but things don’t go as planned; as Charlie Joe warns, “always be wary of plot twists.” Charlie Joe’s wry, first-person narrative, interspersed with anti-reading tips and occasional small cartoons, mocks nearly everyone, also himself, and the hilarious wordplay adds to the fun: Charlie Joe is in love with Hannah, but if she is flawless, her twin brother is “flawful.” Not all books are bad, though: Charlie Joe does like checkbooks (a source of gifts from grandparents), comic books, and Facebook. A perfect readaloud, this debut is filled with passages that beg to be shared: “It is impossible to concentrate because I don’t have my cell phone to text my friends to break up my concentration.” With its subversive humor and contemporary details drawn straight from kids’ worlds, this clever title should attract a wide following.
—Hazel Rochman

And here’s Kirkus, who apparently can be very snarky, so I’ll take it, even though I don’t completely understand it and i had to take out an egregious spoiler:

Charlie Joe will do just about anything to avoid reading in this humorous cautionary tale for book-hating middle-grade students. Debut author Greenwald takes on the persona of Charlie Joe Jackson, a middle-school boy who hates reading. His avoidance techniques get him into serious trouble with his parents, his teachers and his friends. Charlie Joe’s insider knowledge of the inner machinations of middle-school cliques will make younger readers smile in anticipation, and his direct address to readers makes make him feel like an older buddy showing the way. Sprinkled into the narrative are “Charlie Joe’s Tips” to avoiding reading books, written on faux notebook paper, that serve as a little diversion from the plot. As amusing as this is, Charlie Joe’s voice is not consistent and occasionally jars with the intelligent, smart-guy sarcasm that characterizes most of Charlie Joe’s prose. [SAY WHAT, KIRKUS? AREN’T CHARLIE JOE’S VOICE AND CHARLIE JOE’S PROSE THE SAME THING?] That aside, slackers everywhere have a new, likable hero in Charlie Joe Jackson.