So guess what? My book CHARLIE JOE JACKSON’S GUIDE TO SUMMER VACATION came out this week in the new and exciting (and slightly less expensive) Paper-Over-Board format!

To celebrate, I thought I’d talk a little bit about Lech Walesa, who’s a small but important character in the book. For those of you who don’t know, Mr. Walesa was a legendary leader who became President of Poland. And the amazing thing is, he and I have a lot in common. I know you wouldn’t necessarily think so. But it’s true! No, seriously, it is.

Here are just a few of the ways we’re alike:

1. His mustache makes him look like a walrus. One of my favorite bands, The Beatles, has a song called “I Am A Walrus.”
2. He’s Polish. My sister uses a lot of nail polish.
3. His protests helped get his country to change from communism to democracy. My protests helped get my parents to change my bedtime from 8:30 to 9.
4. He worked in a shipyard. I have a back yard.
5. He once said, “Freedom is priceless!” I once said, “Being grounded stinks!” So we’re both saying essentially the same thing.

(Below: JP Coovert’s sketch of the Lech Walesa biography, from CJJ3) 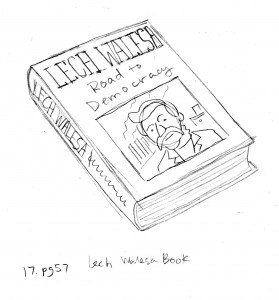