I’ve been in love with Texas librarians every since I met Sadie in the pages of Stephen King’s 11/22/63, so I was very honored to be invited to speak at this year’s Texas Librarians Association Conference, which took place last week in Houston.

I looked for Sadie – she would be about 90 years old by now, with a big scar on her face — but I never found her. No matter – I had a terrific time with all the other wonderful librarians.

I was there speaking on a panel about reluctant boy readers, with fellow authors Nick Bruel, Janet Tashjian, Tony Abbott and Obert Skye.

Combined, their books outnumber mine, 5,384 to 1. But they made me feel like I belonged anyway, because they’re good people.

But first things first. Whenever I go to a new city, I like to go to the zoo. Which is where I met this guy. 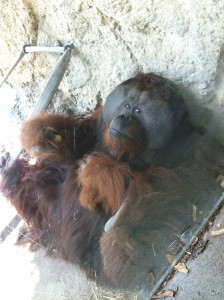 At first I thought he was a fellow author, because of his kind, sympathetic eyes, but he said there wasn’t enough money in it.

Then it was time for the panel. This is what the room looked like ten minutes before we were scheduled to speak. 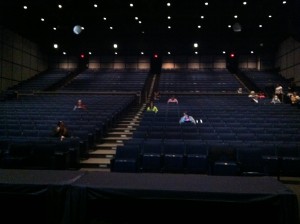 That was a little worrisome.

But more people came, and we had a great time. Afterwards, we signed books. I got to sit next to Nick Bruel, which was a big plus, because people who were tired of waiting on his long Bad Kitty line could come over to my line, where they only had to wait an average of one second.

Thanks for sending me, Mackids. You guys rock. And thanks for having me, TLA. You guys also rock.

Please say hi to Sadie for me.