BLOG > Hey, Do You Want A Free Signed Copy Of My New Book?

Hey, Do You Want A Free Signed Copy Of My New Book?

Okay, but first you have to read this short piece I wrote. Small price to pay, right?

WE ALL HAVE BLEMISHES

A beautiful girl with a giant pimple in the middle of her nose.

That’s the first thing that popped into my head — no pun intended, I swear! — when I embarked on the story that became THE REAL US.

This was a few years ago, and up to that point, all the middle-grade novels I written – the Charlie Joe Jackson series and its spinoffs, the Crimebiters! series – had a broadly comic bent to them. So naturally, as I dove in to this new story, I assumed that I would go down a similarly humorous path. But interestingly, I soon enough found myself writing a (slightly) more serious book about friendship, self-identity and the limits and labels we put on ourselves, and others, throughout our middle school years.

These are issues that I’ve always been fascinated by: it traces back to when I was a kid myself, trying to straddle the worlds between music (I was a pianist and percussionist) and sports (I played soccer). It wasn’t easy, because each of those pursuits was so self-contained, and all-consuming. And then I saw it in my three boys, Charlie, Joe and Jack, who each found a world to belong to in school, and then found it difficult when they were interested in exploring beyond the boundaries of that world.

Add the extra complication of looks into it – how the “attractive” kids are expected to act a certain way and hang around with a certain kind of person (namely, each other), and how the “less attractive” kids are supposed to stay in their lane and know their place – and you’ve suddenly got the makings of a story that could go in a lot of different directions. And I was interesting in following those directions and seeing where they took me.

I loved creating Calista, Damian and Laura – the heroes of THE REAL US. My goal was to make them funny, confused, complicated and real, or at least as real as fictional people can be.

But don’t worry. Calista – the beautiful one – still gets the giant pimple in the middle of her nose.

You didn’t think I was gonna let that one go, did you?

OKAY NOW… To enter to win one of FOUR FREE SIGNED COPIES of THE REAL US, please use the comments section to answer the following question:

In the essay above, I mention a sport. Which sport is it? 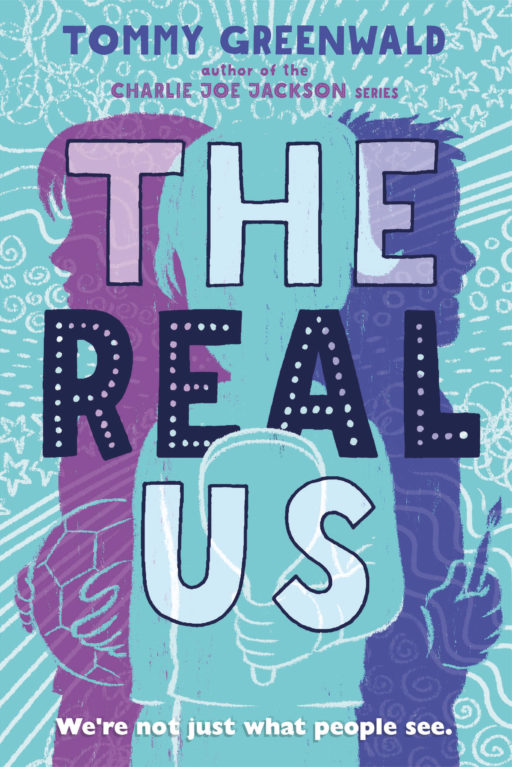